Free the Children’s Adopt a Village program is comprised of four pillars: education, clean water and sanitation, health, and alternative income and livelihood. For Haiti, the program is committed to long-term development and sustainability by eliminating all barriers that prevent children from attending schools and by building schools.

After the recent earthquake in Haiti, Free the Children provided emergency response and relief by protecting children, providing medical supplies and relief, and supporting the population of internally displaced persons. FTC recognized the need for long-term development and decided to add Haiti as a priority Adopt a Village country. Their focus is the Central Plateau of Haiti, which is the most rural and undeveloped part of the country. FTC supports four school communities where less than 50% of children attend school: Pandiassou/Terre Cassee, Dos Palais, Manac and Layeye.
Recently, FTC has also been involved in a new community in the northern part of the Central Plateau: Marialapa. This community has been neglected but is inhabited by almost 4,000 people, with 90% living on less than one dollar per day. In Marialapa, 80% of men and 90% or greater of women are illiterate. FTC has been working to provide tents and furniture in temporary classrooms, allowing the enrollment of students to double.

(Building of Block A in progress) 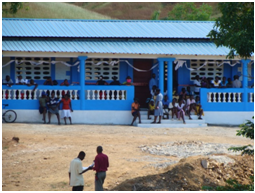 (Building of Block A completed) 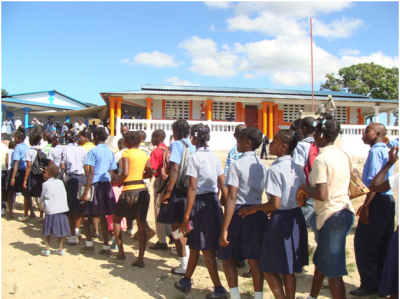 (Students lining up outside the completed Block A)
Supporting education in Haiti has been a big goal of FTC. A donation of $12,500 would support the construction of a classroom in a new two-classroom block in Marialapa. This will give the community the opportunity to receive education in a safe setting and giving them the tools, strength, and confidence to break the cycle of poverty.